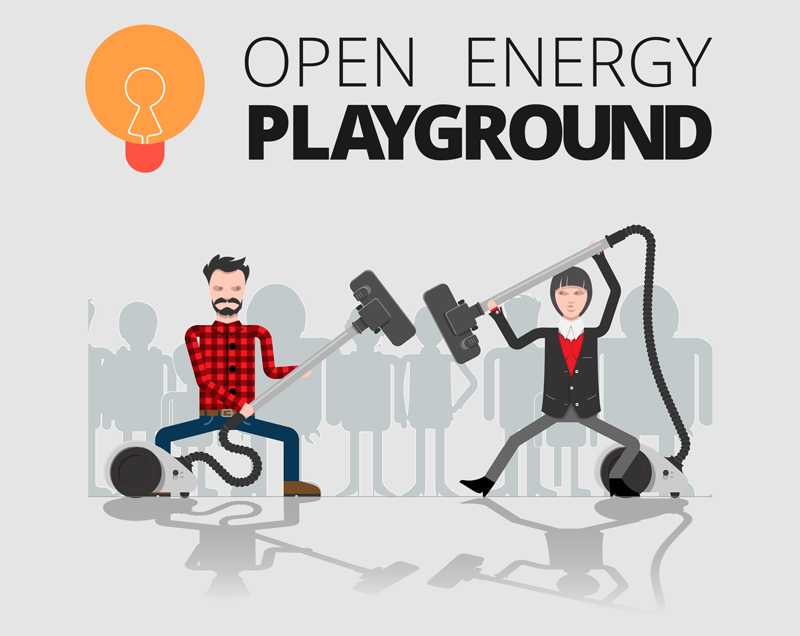 As an example of how the Open Energy Playground can be used, we hosted an epic vacuum cleaner battle!

This page describes the details of how this was achieved.

You should be able to achieve the same things with just one brand of smart plugs, but we used all three just to show that there are alternatives!

All the code is running on the Raspberry Pi, which is using parts of the Pi version of the Open Energy Playground.

Measurement is converted to an MQTT message and sent to broker, broker relayes message to all clients subscribed to the power measurement topic

Message comes in to node-RED script that compares is to previous messages, script determines that power has decreased significantly in the last measurements

Photon updates the number of LEDs lit up

Point visible to the roaring audience

The Raspberry Pi server is running parts of the Open Energy Playground, all running inside Docker containers.

All the code is running on the server is available on Github - Vacuuum Battle.

In the docker-compose.yml file, we can see the containers used.

Because IoT is still in it's infancy, the market hasn't stabilized on one way to transmit wireless data with minimal power.

Therefore, the smart plugs that we use all use a different network protocol. The protocols all have their different advantages and disadvantages, and which one comes out dominant in the end is anyones guess.

Setting up the battleground

Collect all the components needed in the list above.

Plug in the Circle+ in the main power outlet that you will use, so that it is never disconnected, and all power goes through the plug. This special type of Plugwise plug relayes messages from the normal Circle plugs to the USB-stick that we will connect to the Raspberry Pi. By making sure it is always connected to power, we stabilize the plugwise message pipe.

Find a place where you want the fight to happen. Tape a "fighting box" on the ground perhaps?

Make two stacks from the 3 types of smart plugs, so that they are connected:

Power the Raspberry Pi, connect the network cable from the Pi to a LAN port on the router and plug in the Plugwise USB-Stick and Yanzi Radio.

Connect the Router to power.

Optional. Connect the router to the internet. How you do this can vary depending on where you are, but you usually either: 1. Connect the WAN port to another ethernet port already connected to the internet, 2. Bridge the connection from your computer to the router. (Note. if you do this, you will require another computer that is connected only to the local router network to access the Raspberry Pi)

Connect to the local network with your computer.

Now we will access the Raspberry Pi over ssh so that we can control it. We start by figuring out the ip-adress of the raspberry pi. Run a network scan in the terminal of your computer:

Connect to the Pi over ssh:

Download the code to the vacuum battle, if you haven't already.

Start all the programs running on the Raspberry Pi:

Start the Yanzi border router and device server (these instructions will be special for everyone so can't give much guidance here, sorry)